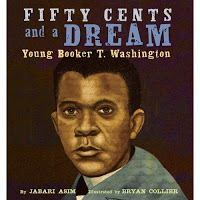 This December, Little, Brown Young Readers will be publishing Fifty Cents and a Dream: Young Booker T. Washington by Jabari Asim, illustrated by Bryan Collier. I had the honor of working with these two talented men—Jabari’s text is evocative and lyrical, and Bryan’s collage art is, per usual, stunning. This dynamic pairing already makes Fifty Cents and a Dream a special book. But what makes this book even more special is the story itself—a true and often overlooked piece of history about perseverance and triumph.
Booker T. Washington is a common figure in social studies classes. He’s briefly covered in most schools, particularly during Black History Month, grouped with other influential African American leaders. While growing up in Alabama, I learned and relearned about Washington; we had Alabama History every year, up until freshman year in high school. Here’s what I gleaned from my many years with Mr. Washington:

I remember the black-and-white photograph that usually accompanied his section in our dog-eared textbooks. He looked very strict and straitlaced, always sitting up sternly, with his legs elegantly crossed and his hands resting on a book.

This was my education of Booker T. Washington. And then I received Jabari’s manuscript.

The story opens with Washington as a young boy, still a slave, a couple years before Emancipation. He’s dreaming about learning to write and read the words that live in books. In the mornings, he walks his master’s daughter to school, always holding her books for her. He’s tempted to peek inside them, but he knows he can’t open them—a slave caught reading would certainly be punished.

After Emancipation, life is still tough. He works in a salt furnace and then a coal mine in West Virginia. It’s hard physical labor, especially for a child. His mom finds a copy of the Webster’s The American Spelling Book for him, and after work, he attends classes in a one-room schoolhouse. This is when he starts to recognize words and numbers, and this is what makes him want more.

As a teenager, he hears of a school called Hampton Institute, where they are offering blacks a chance at higher education, and Washington knows he must go. He and his community have very little money and resources; he can’t afford food for the journey, much less transportation from West Virginia to the coast of Virginia.  But they give him what they have and he sets off. Along the way, he faces hunger, exhaustion, and lack of shelter. When he finally reaches Hampton, he has fifty cents in his pocket and a dream about to come true. 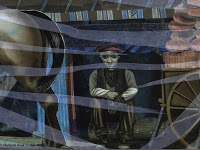 In his autobiography, Up From Slavery, Washington calculates that his journey totaled about 500 miles, covered mostly by foot. In a time where I can’t imagine navigating the easy grid-like streets of New York without Google Maps and Hop Stop, it’s hard to envision walking along rural paths and into dark woods, with nothing to guide me except the stars and an internal compass. I will never understand what it’s like to not have money, food, or a place to sleep. And I do wonder deep down if I could ever be gripped by a dream so much that I would actually take the steps through physical and mental hardship to realize it.

And suddenly, that old black-and-white photograph of Washington comes to life. 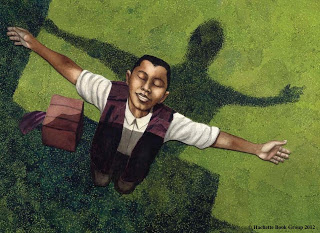 In his author’s note, Jabari mentions that Washington, as a black activist and leader, was not wholly celebrated by all. In many circles, his decision to compromise with the white establishment was considered a betrayal, and to this day, some still consider him a controversial figure. But regardless of opinion, his 500-mile journey remains an inspiration, and hopefully, it will encourage readers to take some brave steps of their own.

As for me, I am still trying to follow my internal compass, and I have already gotten lost plenty. But I know that with faith, determination, and confidence, I will find the right way. And that, folks, is the real education of Booker T. Washington.
5 years ago